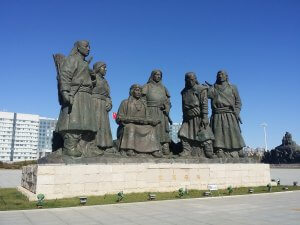 When one refers to the Mongols and the history of Mongolia, many think immediately of barbarians riding horses from burning village to burning village. However, there are parts of the Mongolian empire that were more tolerant, open and prosperous than what the stereotypes might suggest.

The Mongols were mainly nomads (a tribe of people who moved from place to place trading with nearby villages) until 1162 C.E. When one man changed the Mongolian mindset and changed the Mongols from a collection of tribes to a dominating unified empire. His name was Genghis Khan.

Born into an impoverished tribe in modern day inner Mongolia, Temüjin (his real name) had a rather active and lively start to life. He lost his father at a young age and killed his brother over an argument when he was younger than ten. He also retrieved his mother from a rival tribe after she was taken which showed his military knowledge at a young age.

Eventually, he became the leader of his clan and went to war against various tribes with unprecedented success as he implemented various tactics which helped him defeat more notorious and richer tribes. The tactics were to promote men based on merit and not wealth which was the system all the other Mongol tribes had used. This provided incentives for the poor soldiers and a sense of fairness which resulted in the peasants loving him. Genghis also recruited peasant Mongols from defeated tribes to increase his army instead of the traditional Mongol way, which was to kill all their enemies.

With constant success Genghis Khan became recognized as Khan for his tribe and after more wars against rival tribes he became ‘Genghis Khan’ which is thought to mean ‘universal ruler.’

The beginning of the Mongol Empire 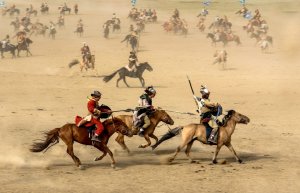 After combining Mongol tribes and amassing a strong army Genghis Khan looked to surrounding empires, and planned a strategy that would lead to one of the biggest empires ever seen.

Genghis Khan led the Mongols in a campaign against the Western Xi (northwest China) and successfully defeated the Uyghur Turks dynasty. His attention was then drawn to the Jin empire and in 1215 he captured the capital of Jin which was called Zhongdu.

For most of his life, Genghis attacked empires surrounding Mongolia and became more and more violent. He ordered his soldiers to execute an entire town including women and children from Urgench, the number of executed Urgench civilians is estimated to be over 1 million. He also adopted a particularly grotesque tactic when he ordered his soldiers to use captured civilians as body shields when attacking Samarkand.

Genghis Khan had more than tripled the size of the Mongols empire. It stretched from Eastern China to the borders of Russia. His military campaigns reached Afganistan and India and with no real defeats. Genghis Khan’s tactical awareness and combat skills were second to none.  He had increased his empire in 40 years more than the Romans had in 400. He died in 1227, the cause of his death is not fully known, but many historians speculate it was in battle during the fall of Yinchuan.

A valid criticism of the great Khan would be that he was only a wartime leader and that he had not created an infrastructure to maintain the massive empire he had gathered. He did, however, shows religious and cultural tolerance, and was one of the first great empires to separate church and state. He also created a meritocracy where those who proved themselves whatever their background would be merited and rewarded.

Genghis’ son Ogedei who was nominated by Genghis became the great Khan. However, spirits were beginning to show, and Genghis’ children had each received divided armies and land from their father and Ogedei struggled to unify all of his family. Ogedei focused on continuing his father’s work and reached Europe and extended the Mongol empire to its peak size. About a decade later Ogedei died under suspicious circumstances, and so began a complicated period of leadership until Kublai Khan began his reign in 1260.

In his early years as Great Khan, Kublai had to unify the Mongols and fought his brothers and other high ranking Mongolians to establish his control of the Mongol empire. After uniting the empire, Kublai turned his attention towards China after a successful invasion of Eastern China. Kublai began to focus on China as he loved their culture and took it upon himself to become the unifier of China. Unlike many Mongols before him, Kublai was a very educated leader. He regularly listened to his advisors and wife before making policies or starting a military campaign.

One of Kublai Khan’s main achievements was that he ruled a multicultural society successfully, with policies such as after military campaigns paying for repairs for not only his army but for the land he had attacked, which pleased the peasants and helped the conquered cities become part of the Mongolian empire.

Unfortunately, there was a rebellion in Mongolia against Kublai as many saw Kublai as a traitor to Mongolia as he built cities in China instead of Mongolia. He also spent most of his time in modern day Beijing which annoyed traditional Mongolians who amassed a strong army against Kublai.

The army marched towards Kublai Khan to try and overthrow him as great Khan. Kublai had to leave the campaign against the Song Dynasty. This rebellion was crushed not by Kublai but by disease as the leaders of the rebellion became sick and died. Kublai could then put all his attention again to China.

Kublai’s obsession with China meant that the rest of the empire began to fracture as Kublai allowed each of the four sections of the empire to practice their religion and culture independently. Mongolia under Kublai’s leadership played more of a shadow role and decades later Mongolia’s influence on Persia, Eastern Asia, and Russia would be nonexistent.

The Mongols effect on history

Mongolia started as a nomadic state until Genghis Khan rose to power, united the Mongol tribes and conquered most of Asia in a movie like fashion. Then Kublai Khan like his grandson before him united the Mongols through violence and almost crushed the huge Song Empire before having to deal with a Mongol rebellion.

After a few hundred years of dominance and establishing one of the greatest empires which at its peak contained 1/5 of the world’s population, the Mongolian Empire declined as the Ming dynasty began in 1338, and thus the Mongolian Empire slowly receded further and further back until it influences only went as far as Mongolia’s borders today.