To begin discussing Chinese art, we have to go back to the beginning of the Chinese dynasties. Starting with the Han dynasty (206 BCE – 220 BC) when jade was discovered through the Silk Road. In this first Chinese art article, I’ll give you a crash course on jade, its mystery and significance in Chinese culture. 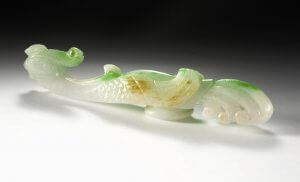 Jade: the beginning of Chinese art

For starters, jade or yù refers to a number of minerals but within Chinese art, it’s mainly nephrite and jadeite. Jade comes in a range of different colors due to chemical reactions from elements such as iron and copper and brings a spectrum of colors to the stone, ranging from grey-greens to radiant yellows and reds.

Excavation of Jade didn’t start just in the Han period; archaeologists believe that it was around 3000 years before in the inner Mongolia areas, but people exhausted the resources. Jade is held higher than silver and gold in Chinese culture, being made into ornaments, ceremonial weapons, and ritual objects.

Archaeologists have seen the stone carved with great skill and reflect incredible development at such an early stage. Early carving designs range from long Neolithic blades to plaques, ornaments, dragons, animals and human sculpture. A valuable jade artifact in this period is a coiled dragon known as the “pig-dragon.”

Throughout Chinese art, jade was found sculpted into two main forms, bi, and cong. The significance of these two types of jade sculptures is unknown, but archaeologists and art historians cannot look over the craftsmanship found in these pieces.

Bi, which has no translation, is the name for jade that’s made into grand circles mostly used in burial rituals. Stone rings in Eastern China have dated back as early as the fifth millennium BCE. Often found in tombs, these discs are laid upon dead bodies near the stomach and the chest. This was practiced in the Hongshan culture (3800 – 2700 BCE) and into the Neolithic era. Scholars believe this to be an innovation from the Liangzhu Period (3000 – 2000 BCE).

Jade was believed to have magical properties, powerful during death, protecting the body from decay. This idea was short-lived, as jade was being carved into other forms and used for other reasons.

Cong, which also has no translation, refers to a tube that has been found in tombs of royalty. Archaeologists have found bi and cong to be buried in tombs as was custom in China as it was in Ancient Egypt many centuries ago to bury oneself with valuable possessions. Cong wraps its circular center with a square outside. The heights range from as tall as an average person to miniature sizes. The outside of a cong is decorated with circles which some have been deciphered as faces to represent spirits or deities. Scholars have theorized that the center represents the sky or heavens, and the square surroundings the earth, bringing the two together. 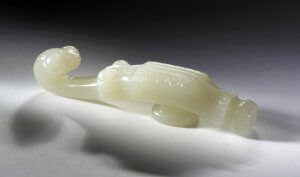 Due to lack of documentation, or even writing in these early stage of the world, jade is a true mystery and information on the gem is rare. But some concepts have come from those who study Chinese art, and the Chinese culture. Bi and cong are believed to have religious meaning as they were used in burial ceremonies, bringing together the meanings of earth and the heavens.

Above is a favorite saying among the Chinese culture, also known as a three character saying. The quote parallels the work put into carving the jade and becoming a principled, or wholesome human. All the work that goes into working with jade, which is such an unyielding mineral, one that wears jade shows that they are a person of virtue and respects their gods and ancestors.

In Chinese art, jade holds an important role as being one of the earliest art forms found since the Neolithic era in China. The sculptures found still hold the same ancient beauty from whence they were made, and hold a touch of mystery.

Liked this article? Then please share on social media